More than half of U.S. states will raise their minimum wage in 2022, but employers are hiking pay faster

California’s largest businesses will be required to pay workers a minimum of $15 an hour in January.

It’s a milestone fast-food workers have been trying to achieve since 2012. But anti-poverty activists aren’t satisfied. Citing the state’s high cost of living and rising inflation, they are pushing for more.

Activist and investor Joe Sanberg is financing the attempt to gather enough signatures in California to get a ballot initiative in front of voters for the November election. Sanberg, who has talked about potentially running for president, wants the state’s minimum wage to hit $18 an hour for all businesses by 2026.

“We were a leader in pushing for a $15 minimum wage, but now we have to move the ball forward and farther. It’s overdue for $18,” Sanberg told the Los Angeles Times.

Next year, 26 U.S. states and Washington will raise their minimum wages, but only California and parts of New York will mandate hourly pay of at least $15, according to a report from payroll experts at Wolters Kluwer Legal & Regulatory U.S.

However, many workers will see more substantial pay increases because their employers chose to raise their pay floor on their own.

A tight labor market resulted in many companies, ranging from banks to retailers to pizzerias, hiking wages for hourly workers to attract and retain staff. This year marked the first time that the average wage of restaurant and supermarket workers rose above $15 an hour, according to the Bureau of Labor Statistics. Wages and salaries increased 4.2% for the 12 months ended in September 2021, the BLS found.

Other employers have surpassed the $15 benchmark already. Amazon has paid its workforce at least $15 an hour since 2018 and began offering new hires an average of $18 an hour this September. Costco raised its minimum wage to $17 an hour in October. Full-time employees of crafting retailer Hobby Lobby will earn at least $18.50 an hour starting Jan. 1. T-Mobile is paying its 75,000-person workforce at least $20 an hour. And Bank of America has pledged to pay hourly workers $25 an hour by 2025.

“It’s a job-seekers’ market, which means competition to keep and find top talent is competitive — and as a great employer, we like it that way,” T-Mobile CEO Mike Sievert wrote in a letter to employees announcing the wage hike on Dec. 10.

The pandemic also brought new awareness to and appreciation for hourly workers and their low wages. Restaurant dishwashers and grocery store cashiers were deemed essential and often earned bonus pay for working during lockdowns, helping provide consumers who were stuck at home with necessities. Higher unemployment benefits also shed light on how little pay many low-wage workers earn, with many depositing unemployment checks higher than their old paychecks.

Anti-poverty advocates are beginning to push for wages higher than $15 an hour as well, citing inflation and the costs of basic needs. Inflation surged 6.8% in November, the fastest rate since 1982, and paychecks aren’t stretching as far at the grocery store or gas station. Real average hourly earnings, which factor inflation and the average workweek into calculations, fell 1.9% in November compared with a year ago. Whether higher wages are a driving force behind the current inflation is a source of disagreement for economists.

“Now, $15 is widely understood to be the bare minimum workers anywhere need to get by. $15 has always been the floor, not the ceiling, for wages — and working people will continue to demand lawmakers and employers increase pay to keep up with the rising cost of living and ensure that every community can thrive,” Allynn Umel, campaign director for the Fight for $15 and a Union, said in a statement to CNBC.

Still, some of the nation’s largest private employers have starting salaries that trail the $15 benchmark. For example, Walmart hiked pay for workers to a minimum of $12 an hour earlier this year, up from its $11 pay floor it set in 2018. But the retailer says its average U.S. wage has risen to $16.40.

Companies are planning wage increases into next year to stay competitive, a sign that the labor market won’t snap back even as unemployment fell to 4.2% in November. Walgreens Boots Alliance is aiming to hit $15 an hour by November 2022, while Olive Garden owner Darden Restaurants announced earlier in December that it would be accelerating its plans to raise pay to $12 an hour, including tips.

And while more than half of U.S. states are hiking wages in 2022, 20 states have the same pay floor as the federal minimum wage: $7.25 an hour. The majority of those states have elected Republicans as their current governors and have a lower cost of living than states that are raising their minimum wages. 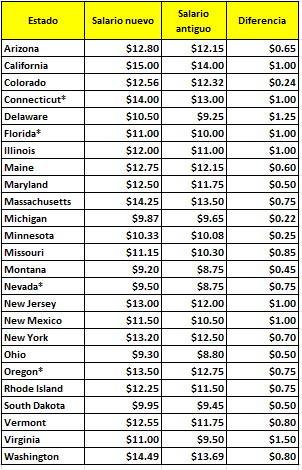 Earlier this year, Democrats tried to raise the federal minimum wage through an amendment in the Covid-19 stimulus bill, but the effort failed. The federal pay floor has been stuck at $7.25 an hour since 2009.